Find out what to visit

From the residence you can easily reach many points of interest such as the historic center of Naples, the Amalfi and Sorrento coast, the islands of the Gulf, Pompeii and Herculaneum excavations and the Royal Palace of Caserta.

Visiting the historic center of Naples means crossing twenty centuries of history. The plan of the streets, squares, churches,monuments, public buildings and castles form a casket of artistic and historical treasures so exceptionally significant to deserve the inscription, in 1995, on the UNESCO World Heritage List. The historic center of Naples is one of the largest in Europe and therefore collects evidence of different styles and periods. The most important monuments are San Severo Chapel (with the Veiled Christ), the Basilica and Cloister of Santa Chiara, Naples underground, San Gregorio Armeno, the museum MA.D.RE.

Extended for 80 km. from Pozzuoli in the north to Sorrento in the south, the gulf of Naples offers itself in all its breadth to the gaze of its admirers. West the Campi Flegrei and their intense land activities, south the Sorrento peninsula, rough and wild, bordered by cliffs and crossed by deep gorges. In between, villas of past eras and today’s seaside resorts dot the vast bay with the islands of Ischia and Capri on the horizon. Not forgetting the Vesuvius, majestic and menacing mountain, omnipresent. From the port of Santa Lucia (from where you can admire a beautiful view of Vesuvius) you can see the promenade that winds up to the small bight of Mergellina. It is one of the favorite Sunday walks for Neapolitans, far from the bustle of the city center. In the evening and up to the early morning, young people and night owls meet in Sannazzaro square. 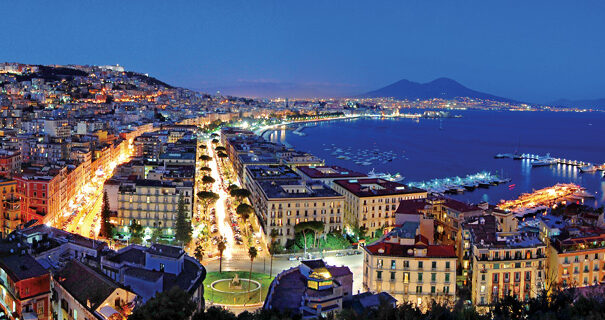 CAPRI Bright white houses, squares similar to theatrical scenarios, a very Mediterranean aspect, this is how the island presents itself to the hordes of visitors who cross in front of the boutiques or invade the outdoor areas of the cafes, waiting for the ferry to depart. .. but as soon as you move away from the center, along the paths lined with villas and luxuriant gardens, away from the crowds, the magic of Capri takes place. ISCHIA It is divided into two parts: Ischia Porto, where you will arrive from Naples on board one of the numerous ferries or hydrofoils, and Ischia Ponte, connected to the port by Corso Vittoria Colonna. The latter, a place where bars and shops follow each other very closely, leads to the dam built by the Aragonese to join the coast to the rocky spur on which their Castle stands. PROCIDA Procida, an island in the Tyrrhenian Sea, is located at the entrance of the Gulf of Naples, between Ischia (west) and Capo Miseno (east). With its 4 square kilometers of surface, it is the smallest of the sister islands Ischia and Capri, but has almost 11,000 inhabitants. To admire its beauty, to enjoy those shows transfused into art, literature, in the many films shot there, you have to wander through its narrow streets, through its alleys.

CASTEL DELL'OVO.Its name derives from the ancient legend according to which the Latin poet Virgil, who in the Middle Ages was also considered a magician, hid an egg in the dungeons of the building that kept the entire fortress standing. Its breaking would have caused not only the collapse of the castle, but also a series of disastrous catastrophes in the city of Naples. Castel Nuovo, or better known as MASCHIO ANGIOINO, is a historic medieval and Renaissance castle, as well as one of the symbols of the city of Naples. The castle dominates the scenic Piazza Municipio and is home to the Neapolitan Society of Homeland History and to the Naples Committee of the Institute for the History of the Italian Renaissance, housed in the premises of the SNSP. In the complex there is also the Civic Museum, which includes the Palatine Chapel and the museum itineraries on the first and second floors. 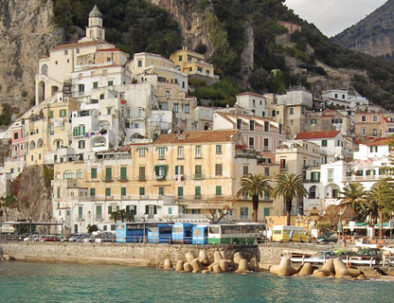 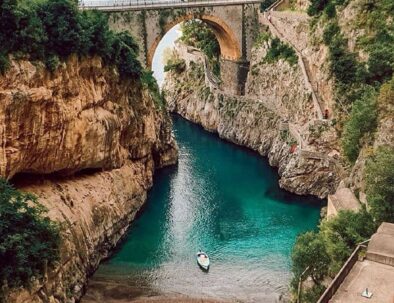 SORRENTO AND THE AMALFI COAST

POSITANO Lying on a vertical promontory that falls sheer into the turquoise waters of the sea. Positano is a delightful town with white fishermen's houses clustered around the glazed tile dome of its Collegiate Church. It is not surprising that, for some time now, artists and intellectuals have chosen it as their favorite holiday destination. SORRENTO Hotels, villas and flower gardens: this is how Sorrento appears, surrounded by lemon trees from which the spectacular panorama embraces the sea and the Gulf of Naples, not far from the enchanting island of Capri. Renowned holiday resort that gave birth to Tasso, author of “Jerusalem delivered”. COSTIERA AMALFITANA It is the stretch of the Campanian coast located south of the Sorrento Peninsula, overlooking the Gulf of Salerno. It is bordered by Positano and Vietri sul Mare and is a stretch of coast famous all over the world for its naturalistic beauty. Considered a World Heritage Site by UNESCO, it takes its name from the city of Amalfi, the central nucleus of the coast. The Amalfi Coast is also known for its typical products such as Limoncello, anchovies and fish preserves.

Sumptuous city, which together with Herculaneum and Stabia was buried in 79 AD. from a terrible eruption of Vesuvius. Pompeii constitutes a document of fundamental importance on life in antiquity. The various layers of ash, under which the city was buried until the 18th century, have allowed it to be kept in an excellent state of conservation. Its ruins offer today a grandiose and exciting vision of what could have been a Roman city of the imperial era. 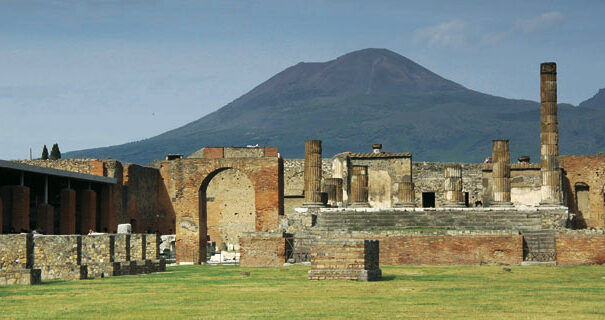